Kyra had already been practising as a BSL/English interpreter (carefully supervised by the late and wonderful Mal Crookes) for two years before she qualified (with overall distinction) to join the Register of Sign Language Interpreters in 1990.

Since that time she has interpreted in national and international settings, working in a wide range of domains.

Her interpreting career has shown her all human life; humble podiatry appointments; the muddy fields of the music festival; the glitz of theatrical stage performance; the buzz of television; the intensity of serious crime investigations, police cells, Crown Courts and meetings with the Lord Chief Justice; debates of amendments on the floor of the House of Commons (Broadcasting Bill, 1990); the private meeting rooms of the Scottish Parliament and the House of Lords; the discreet efficiency of appointments with the British Royal family; the hurly-burly of political conferences and time-pressed Ministers, Prime Ministers, Presidents and world leaders; the private and public faces of an eclectic selection of celebrities; the internal corridors and debating floors of the main European political institutions (notably for the signing of the Brussels Declaration in 2010); and an impressive array of security arrangements (Bill Gates takes the prize, if you’re interested).

Kyra has also educated, and assessed and advised on the training of a cardre of interpreters and translators working with British Sign Language. She has served on the editorial boards of significant scholarly Journals in the field (Deaf Worlds, The Sign Language Interpreter and Translator) as well as making her own contributions to the literature. A selection of her publications, unpublished papers, translations and materials are available to download.

Kyra in performance at the Heldenplatz 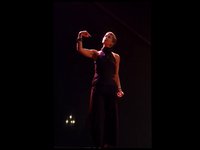